On May 17th 70 young TBF anglers took the water on what would be the inaugural Arkansas Junior State Championship. This would be the first year that only 11 to 15 year olds would take the water, just them and their boat captain.

Lake Ouachita was chosen from the many amazing bodies of water here in Arkansas because of its ability to accommodate the different skill levels of these young anglers. The Shangri-La Resort was the pick for our tournament location because of the hospitality they were willing to show our anglers and their families.

This all started the day before when the anglers arrived. Some just getting to the area, and others from a day of practice on the water. With boat captains in tow, they made their way to the tournament trailer for check-in. Dinner and rules meeting followed. The president of the TBF of Arkansas Doug Thompson went over the tournament rules with everyone and introduced Elite Pro Mark Davis. Mark spent a little time encouraging the anglers and gave some instruction on how to improve their skills.

Tournament morning came early. At 4:00am the boats begin to line up at the ramp. But because of a Line of thunderstorms close to the area the launch was postponed until the lightning threat could pass. The young anglers passed the time in very different ways. Some paced the parking lot looking at their phones and the sky. Some talked and joked around, and some even slept.

As the time grew longer you could tell these young anglers were ready to get on the water. As young as they are, even they knew they had a tough day ahead of them and the delay was not helping things at all. Finally the all clear came and the boats went in the water. Rusty Hunter of One Refuge in Hot Springs gave our Morning Prayer and Le Ann Rhymes Sang the National Anthem from my iPod. The boat numbers were called and the anglers introduced and they were off. With big smiles and bigger hopes they went out to find a limit.

Most of the tournament day was filled with rain. There were times of just drizzle, and times that the rain was so heavy you could not have thrown a 10XD.  Then about 1:00pm the sun peaked through the clouds and the rain ended. At about 2:30pm the boats started coming to the bank and the weigh-in line started to fill. The crowd grew full of parents, grandparents, friends and local folk, eager to see what the young anglers had to bring to the scales.

We had 67 anglers make it to the water on tournament day. Of those, 37 brought weighable Bass to the scales. We weighed a total of 78 Bass, of those, 76 were released back into the waters of Lake Ouachita. The total weight of bass weighed was 133.69 pounds. Most anglers said they caught fish but most were too small to bring to the scales.

When the weigh-in was complete we crowned Hunter Davis of Mount Ida AR. the 2015 Arkansas Junior State Champion. Hunter came to the scales with a five bass limit that tipped the scales at 12.14 pounds. Our runner up was Fisher Bissel also of Mount Ida AR. With a five fish limit that weighed 11.19 pounds. Third place honors went to Jacob Biffle of Russellville Arkansas with a 3 fish bag that went 9.92. Jacob Biffle also took the Trader Bill’s Big Bass award with a big Lake Ouachita Bass that weighed 6.16. Allie Strother of Mount Ida took the Top Lady Angler Award with 2 Bass weighing in at 2.19.

It was a great tournament and we are looking forward to our Arkansas Youth Team Trail that will start this September. 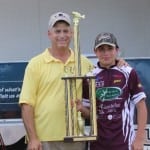 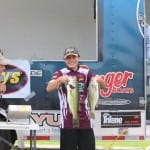 Hunter with his 2 biggest fish 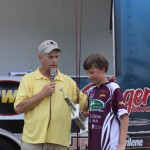 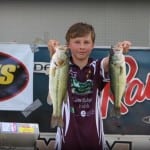 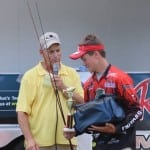 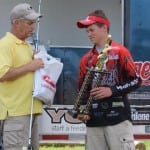 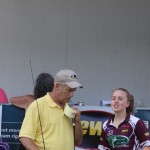 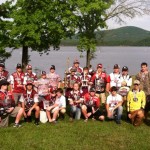 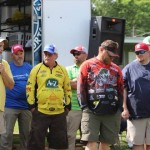 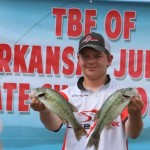 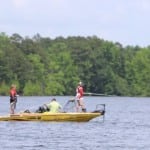