The 2022 TBF District 6 National Semi Finals Tournament was held in Eufaula, Oklahoma on Lake Eufaula on Saturday and Sunday, June 11th and 12th.  If you like fishing a muddy lake with rising waters …

Anglers and co-anglers will be fishing for a spot in the TBF National Semi-Finals tournament to be held at Oklahoma’s Lake Eufaula June 11-12. Greers Ferry Lake – Launching from Hill Creek Marina Qualifier #2 …

It was tough sledding on Lake Chicot for the 20 boaters and 15 Non-boaters. Congratulations to Floyd Davis for the Boater win and Wren Alexander for the Non-Boater win. Boater Big Bass 4.40lbs John Carroll …

The 2022 TBF District 6 National Semi Finals Tournament was held in Eufaula, Oklahoma on Lake Eufaula on Saturday and Sunday, June 11th and 12th.  If you like fishing a muddy lake with rising waters and the days temperatures in the mid to high 90’s, you would have enjoyed the two days of fishing. With these conditions it allows the top anglers to make the daily adjustments in locating and catching the fish that allows them to rise above the others.

The Saturday weigh in resulted in three boater anglers separated by only 0.16#.  Johnny Babb, Oklahoma, led the event with 11.37# while two Arkansas anglers were close behind. Matt Tucker finished with a limit weighing 11.23# for second place and while Jeff Creecy took third place with 11.21#.  The biggest stringer for the day was co-angler Ray Dotson with a creel weighing 13.44#.   Stan Harris, Arkansas, was the second place co-angler with 10.92# while the top Oklahoma co-angler was Larry Carter with 10.36# with a third place finish.

The final day of the tournament greeted the anglers with and extra foot of water while the 100,000 acre lake continued to rise.  Sunday saw some anglers make the correct adjustments and the result was an opportunity to move in the standings.  Jaret Rushing, Arkansas, finished seventh after day one with 9.15# then added the biggest limit of the weekend weighing 13.75# to post a total weight of 22.90# to become the District 6 Boater Champion and qualifies him to fish the 2023 TBF National Championship.  The co-angler race for Arkansas was between the day one top two anglers.  Ray Dotson weighed in 3.38# on Sunday to give him a total weight of16.82# nosing out Stan Harris’ final total of 16.14#. Ray was the District 6 NSF Co-angler Champion and will represent Arkansas co-anglers at the 2023 Nationals.

The biggest jump in standings was in the Oklahoma boater race.  Wyatt Ryan and Bradley Sullivan finished eighteenth and nineth, respectively, on Saturday.  Wyatt weighed in an 11.26# stringer with a 4.52# kicker. Not to be outdone, Bradley had a weight of 12.60# limit with a kicker weighing 4.84#.  The final tally gave the Oklahoma boater slot to the 2022 Nationals tournament to Bradley Sullivan with a total weigh of 19.06# while Wyatt’s total was 17.89#.  The Oklahoma co-angler race saw seventh place day-one finisher Jered Grooms bringing only two fish to the scales, however, one was the biggest of the tournament weighing 6.26# to push his total to 15.82# to top Larry Carter by a couple. 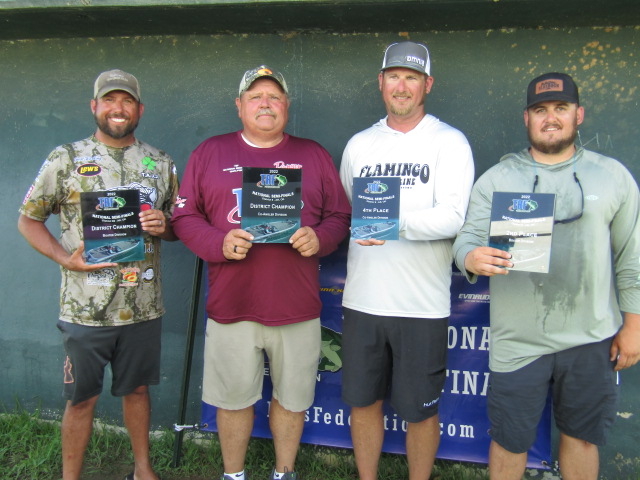 The Arkansas TBF Junior State Championship was held April 23 on Lake Hamilton in Hot Springs, AR. Gricen Shelby and Kamden Green came out on top with a five fish limit weighing 13 pounds 9 ounces. They will be advancing to the 2022 Junior World Championship on Kentucky Lake in Paris, TN July 27-29 and hosted by Paris-Henry County Chamber of Commerce.

Hunter Denton and Zane Cobb took 2nd place with 10 pounds 12 ounces. Hunter and Zane also had the Daily Big Bass at 4 pounds.  Followed by Jasper Jones and Miles Welch in 3rd place with 8 pounds and 10 ounces. In 4th place, Jasper Smith and Connor Davis had 4 pounds and 10 ounces and in 5th place was Eli Kluthe and Briar Allen with 3 pounds and 9 ounces. To see more pictures from this event CLICK HERE 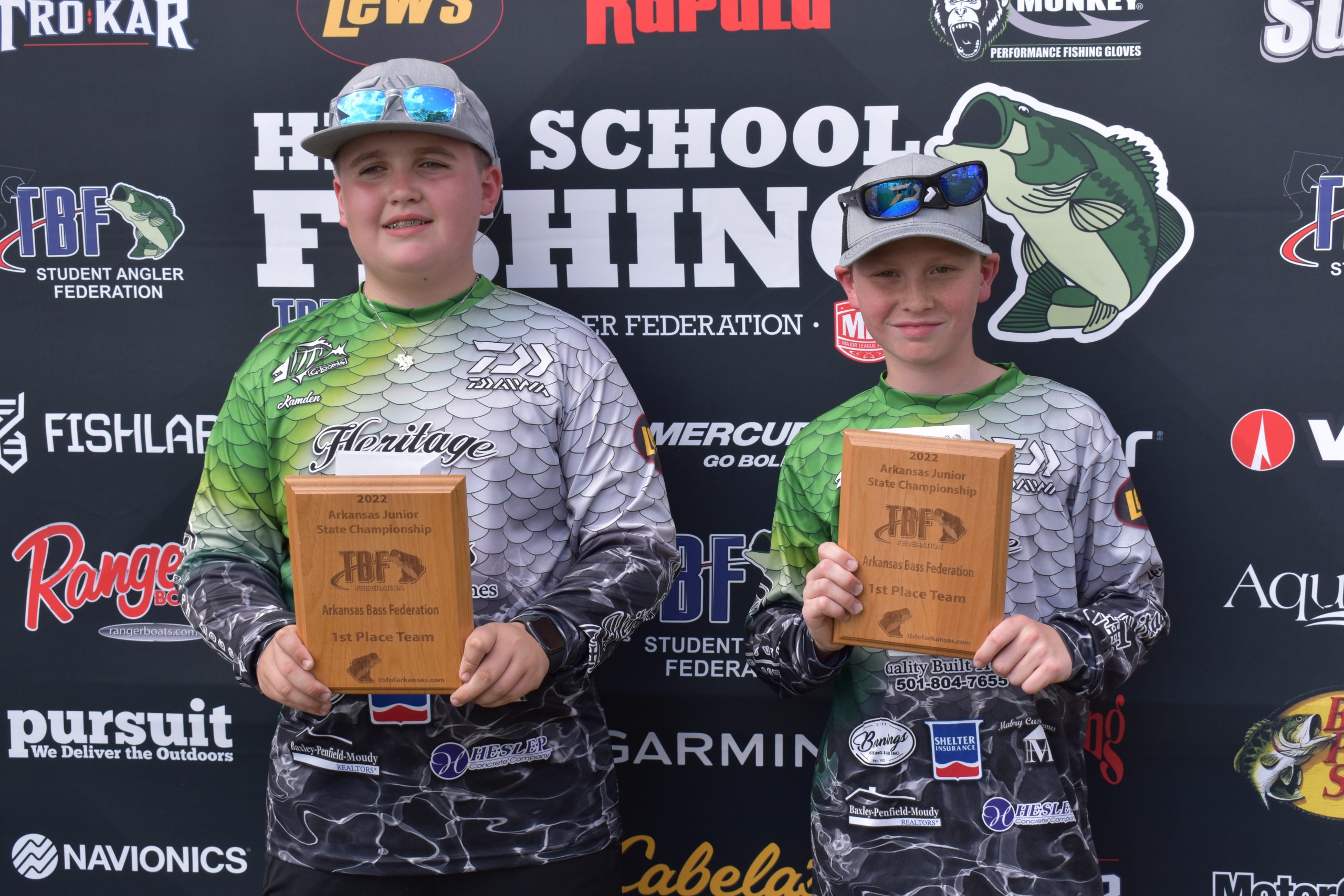 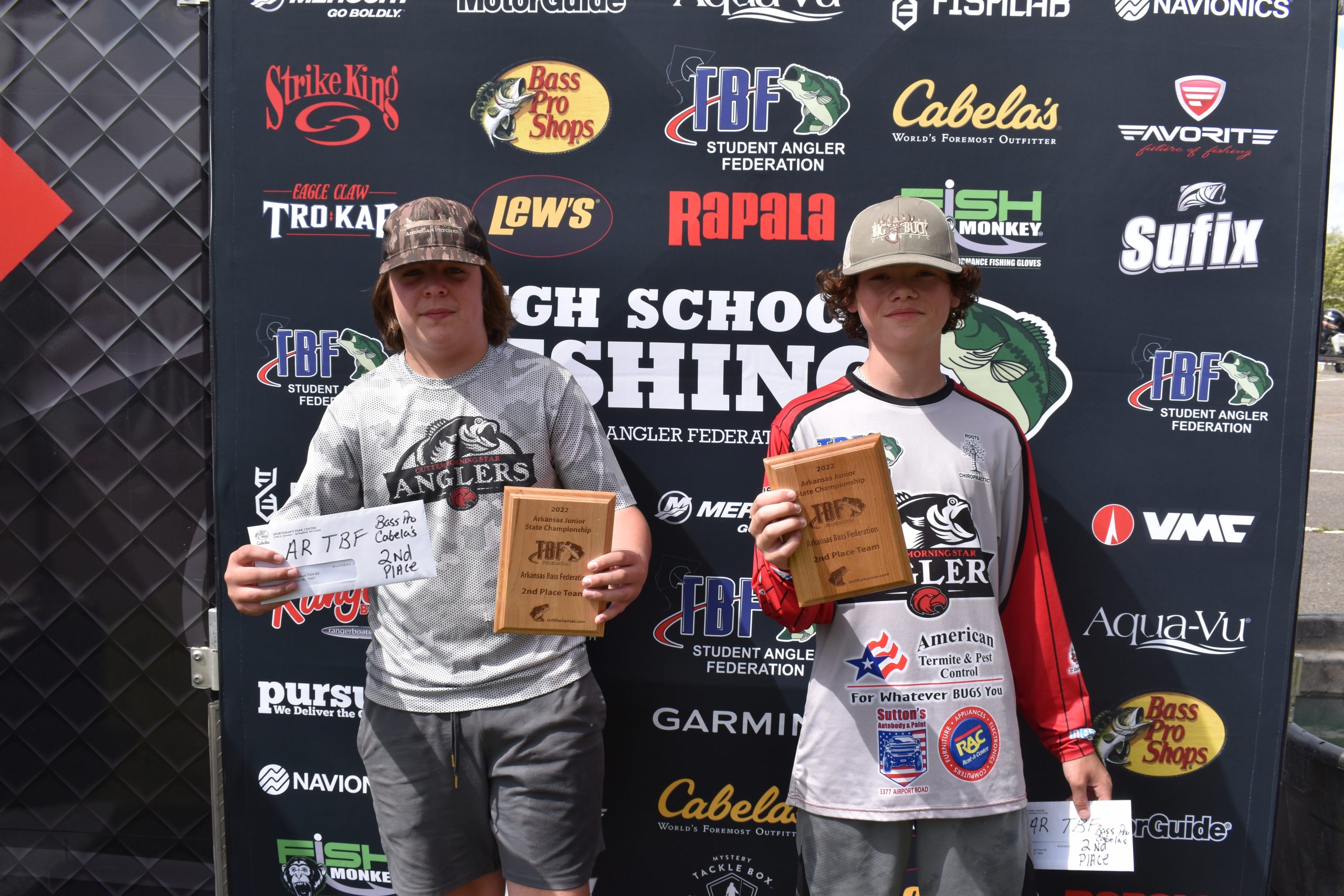 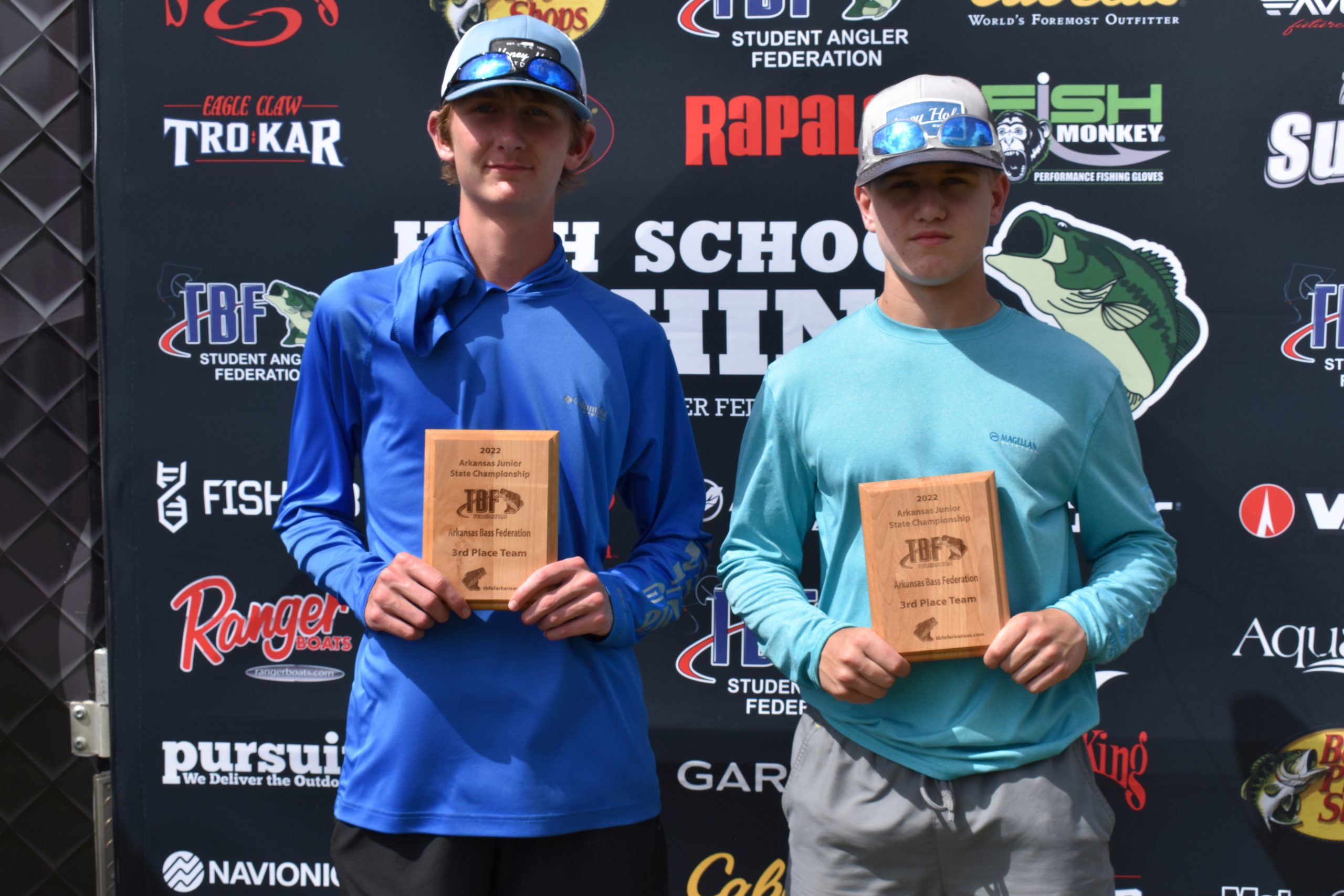 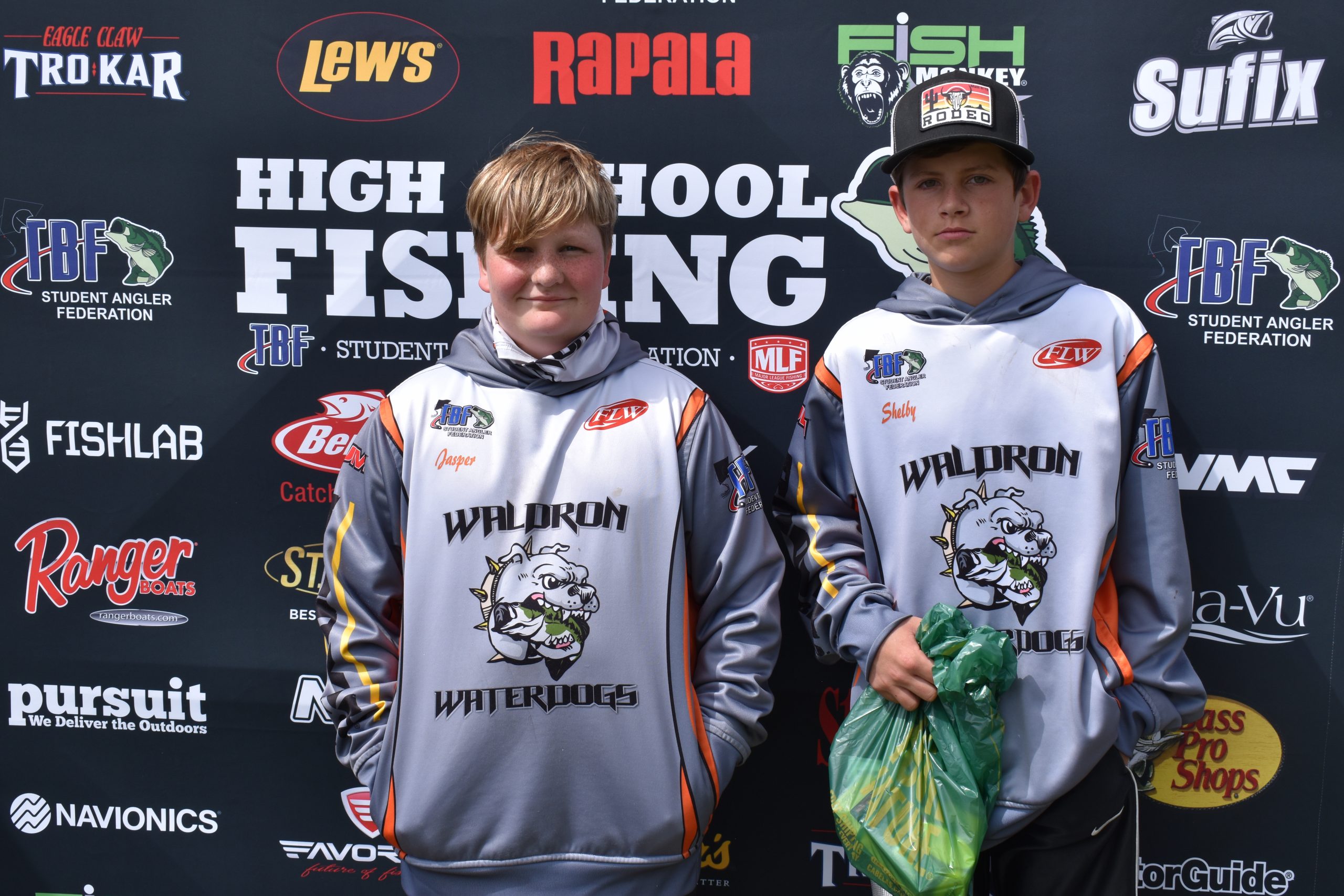 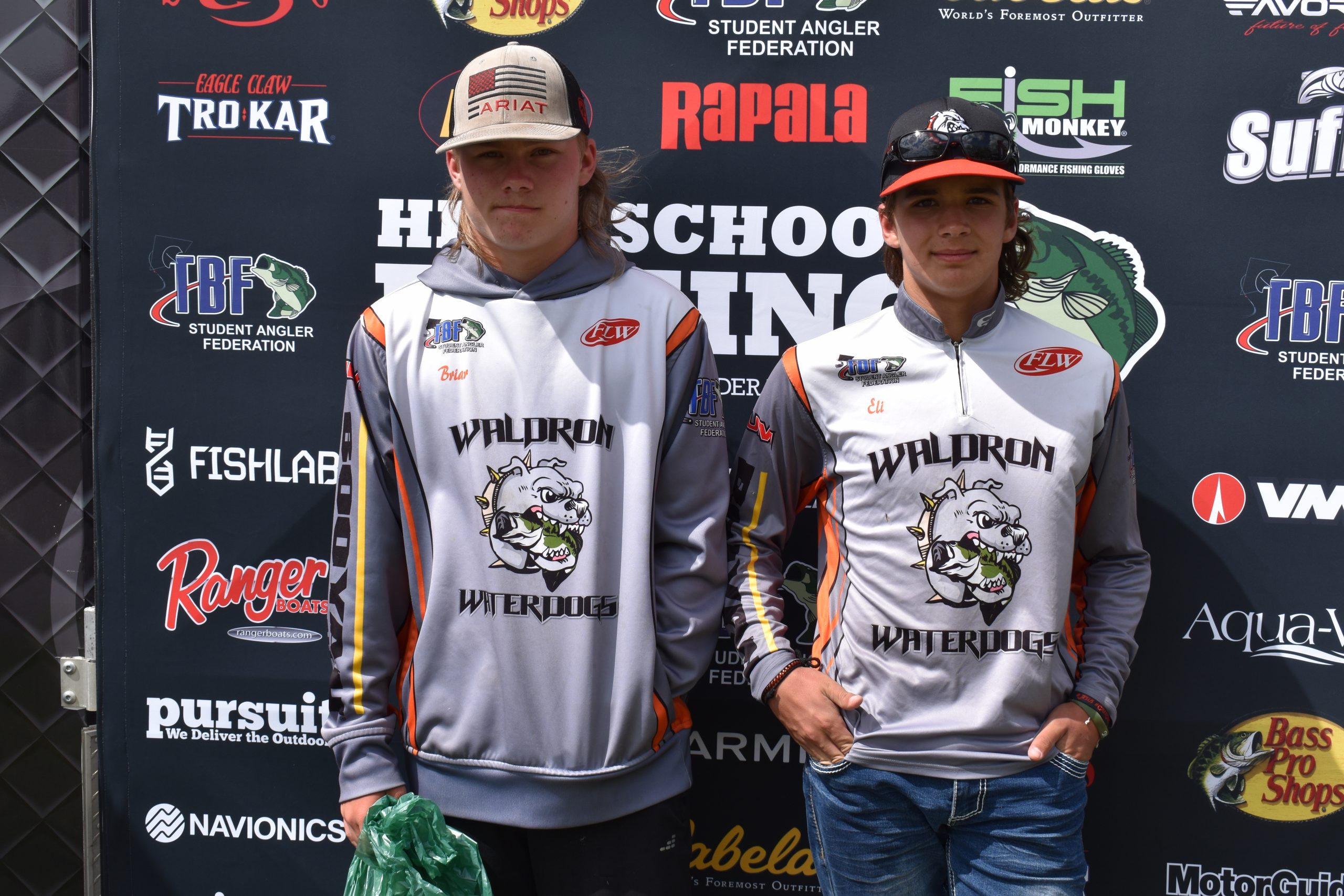 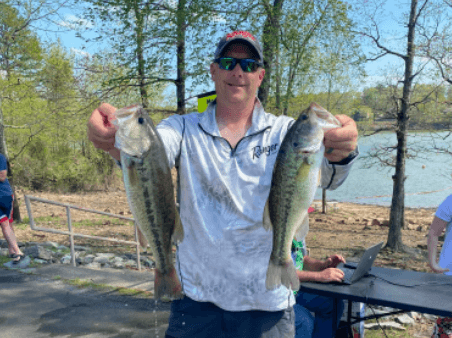 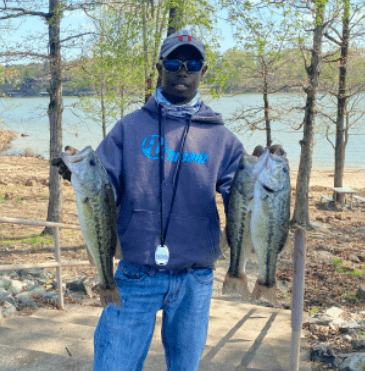 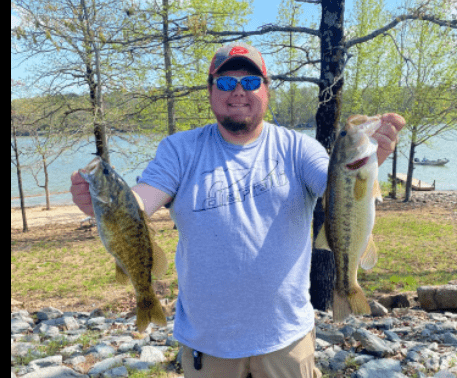 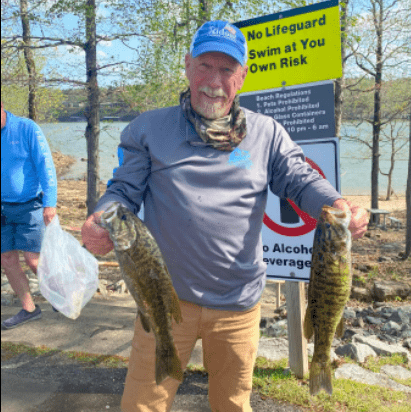 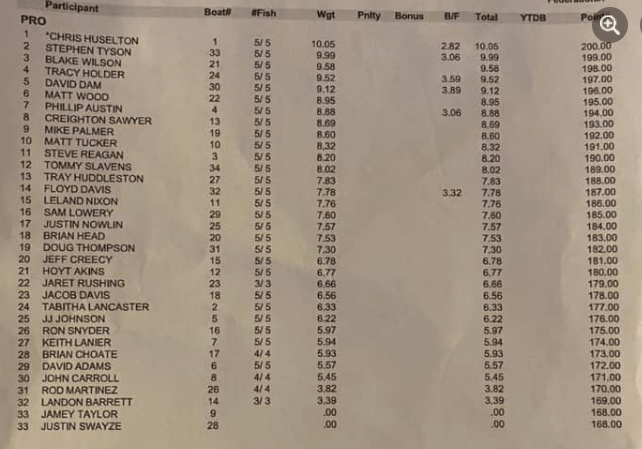 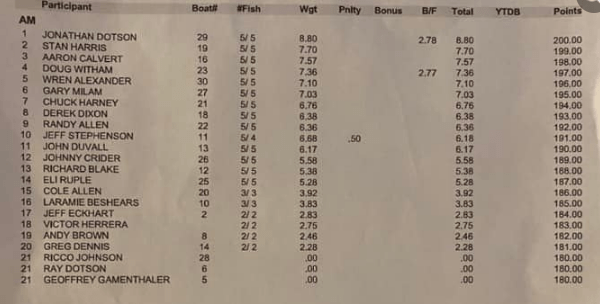